A successful round table conference was held by inviting delegations of businessmen of well renowned companies from Maharashtra State and Delhi looking into initiating new steps and joint ventures in developing business tie ups was held on  the 8th April, 2004 in New Delhi. 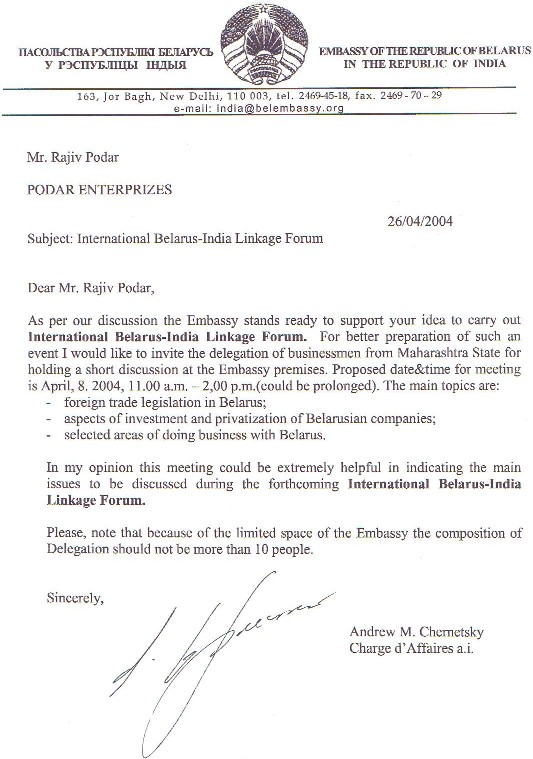 Mr. Andrei M. Chernetsky – Charge d’ Affaires, Embassy of the Republic of Belarus began the session by showing immense interest in developing business relations by cross pollinating ideas related to different trade and banking sectors in India , as he feels India is the fourth largest economic zone in the world.

He said, “We are looking at exploring various possibilities to have joint ventures in our country with the Podar Group, as we see a lot of potential areas in which we can come out as a country to the world and develop our economic condition. He also mentioned that, as the Podar Group is well known to us it would be a fruitful strategic partnership between India and Belarus , which will open new avenues for trade – export and import of things like Spices and Agricultural products, Pottash Fertilizers, Optics, Ball bearings, Dumpers and Mining equipments, cutting Machines, Chemical fertilizers, Electro technical transformers, Diamonds, Tractors & Agricultural Machineries, Wooden exotic furniture’s, from tyres to heavy vehicles for commercial purpose, then hydraulic systems between both the countries.

He added that Belarus had a free economic zones with no customs problem hence movement will be easier. Ms. Nataliya Yasnovskaya. – the First Secretary Belarus embassy in the session spoke about the rules and regulations of admissions and gave open invitations to students from India for higher education into engineering and medical and the procedures for visa and legal formalities required to
get into the country. She said all formalities for admission of Indian students to Belarus should be rerouted through Podars and herself in the embassy only.

Business presentation made by Mr. P.P. Vora, Mr. Tehmasp M. Rustomjee – Director, Deloitte & Touché. They showed interest and emphasized that there were several trade opportunities in India and joint ventures possibilities in the Automobiles, Tyres and fertilizer sectors which could be explored. They also expressed Deloitte’s desire to participate as consultants in the privatization process in Belarus for which they had global expertise.

Mr. Rajiv Podar concluded the session saying Podar Enterprise has close links with Belarus and was the official Indian Belarusian Trade House. He was willing to support trade and investment between the countries.